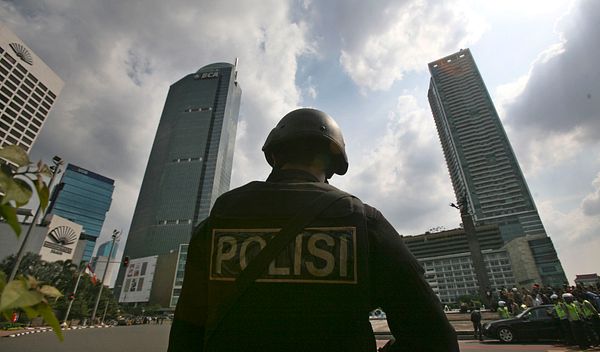 An Indonesian court sentenced an Islamic State group sympathizer to life imprisonment on Wednesday after finding him guilty of plotting bomb attacks against police and Christians.

It said the 10 pledged allegiance to Islamic State group leader Abu Bakr al-Baghdadi and promised to carry out suicide bombings in Jakarta and Lampung, a city in southern Sumatra.

Prosecutors had sought a 15-year prison sentence for Husin. Presiding Judge Kadwanto in East Jakarta District Court said there was no reason for leniency because of the defendant’s lack of remorse and his extreme ideology that could threaten religious harmony and peace.

“He is very dangerous if left out of prison,” said Kadwanto, who uses one name.

Husin’s wife detonated a bomb during a siege of their home, killing herself and their 2-year-old child. She is believed to have blown herself up hours after throwing a homemade bomb that injured an officer as police tried to search the house.

In separate trials, a panel of three judges at the same court sentenced the nine co-conspirators, including Rinto Sugiharto, to prison terms ranging from six to 20 years.

The defendants refused to appeal or accept the verdict, saying they only believe in Islamic law.

Indonesia, the world’s most populous Muslim-majority nation, has been battling militants since bombings on the resort island of Bali in 2002 killed 202 people, mostly foreign tourists. Attacks aimed at foreigners have been largely replaced in recent years by smaller strikes targeting the government, mainly police and anti-terrorism forces, and local “infidels.”

By Niniek Karmini for the Associated Press.

← Cambodia and Thailand: A Story of Swapping Transitions, or Something Else?Time to Jumpstart Australia-Indonesia Economic Relations →