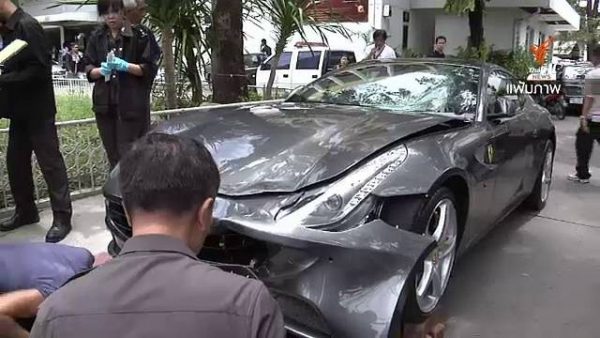 A second autopsy, conducted on the body of Julachart Mardthong, a key defence witness in Red Bull heir’s hit-and-run case, has confirmed a police report that he died in an accident and that there was no foul play.

The finding was disclosed at a news conference this afternoon (Monday) by Pol Lt-Gen Prachuab Wongsook, commissioner of 5th Region Provincial Police, Dr. Bannakit Lojanaphiwat, Dean of the Medical Science Faculty at Chiangmai University and Associate Professor Dr. Kanda Mekjaidee, Chief of the Forensic Science Department at the same university.

An X-ray didn’t find any metal in the victim’s body, but his blood alcohol content was measured at 0.218%.

“A road accident can inflict injury or death if the victim has a 0.218% blood alcohol content, which results in slower reaction times. The muscles lose reactive response because of the influence of the alcohol.  The impact caused the fracture of blood vessels in brain stem,” said the Police Commissioner.

He insisted that doctors examined the body thoroughly and did not find anything suspicious, adding that the full results of lab tests will be out in the next few days and the public will be informed.

Although no traces of assault, which may have led to the victim’s death, have been found, Pol Lt-Gen Prachuab said those in charge of the case have not ruled out assault or suspicions about the victim’s personal wealth.

The victim’s body is still at the hospital, waiting to be claimed by his relatives.

Julachart was involved in a motorcycle accident with another motorcyclist in the early hours of July 30th, in Chiang Mai province, as both of them were heading for a town centre bar.